You are here: Home / Archives for Celebrity Name Change

Name change after marriage isn’t for every newlywed, but McPhee seemed to relish the idea. During an Entertainment Tonight interview she was asked about her married name change and said, “I’ve always liked the idea that it’s still a traditional thing that exists in our society…. I think it’s romantic, and it’s a great last name!”

Tradition and romance are the two wild card factors that come into play when a newlywed considers name change. Mrs. McPhee Foster joins the company of other celebrities like  Priyanka Chopra Jonas, Gwyneth Faltrow (yes she blended names,) Hailey Bieber, and Amal Clooney, who opted to change their names after marriage (despite their fame.)

Are you considering changing your name after marriage like Katharine? If so, the MissNowMrs app or online name change service can save you over 13 hours of hassle. There’s no need to waste precious newlywed time when you have the option to change your name on your phone or laptop!

Help Me Change My Name

After writing about Katharine McPhee married name change, we wish her a lifetime of love and happiness in her marriage! 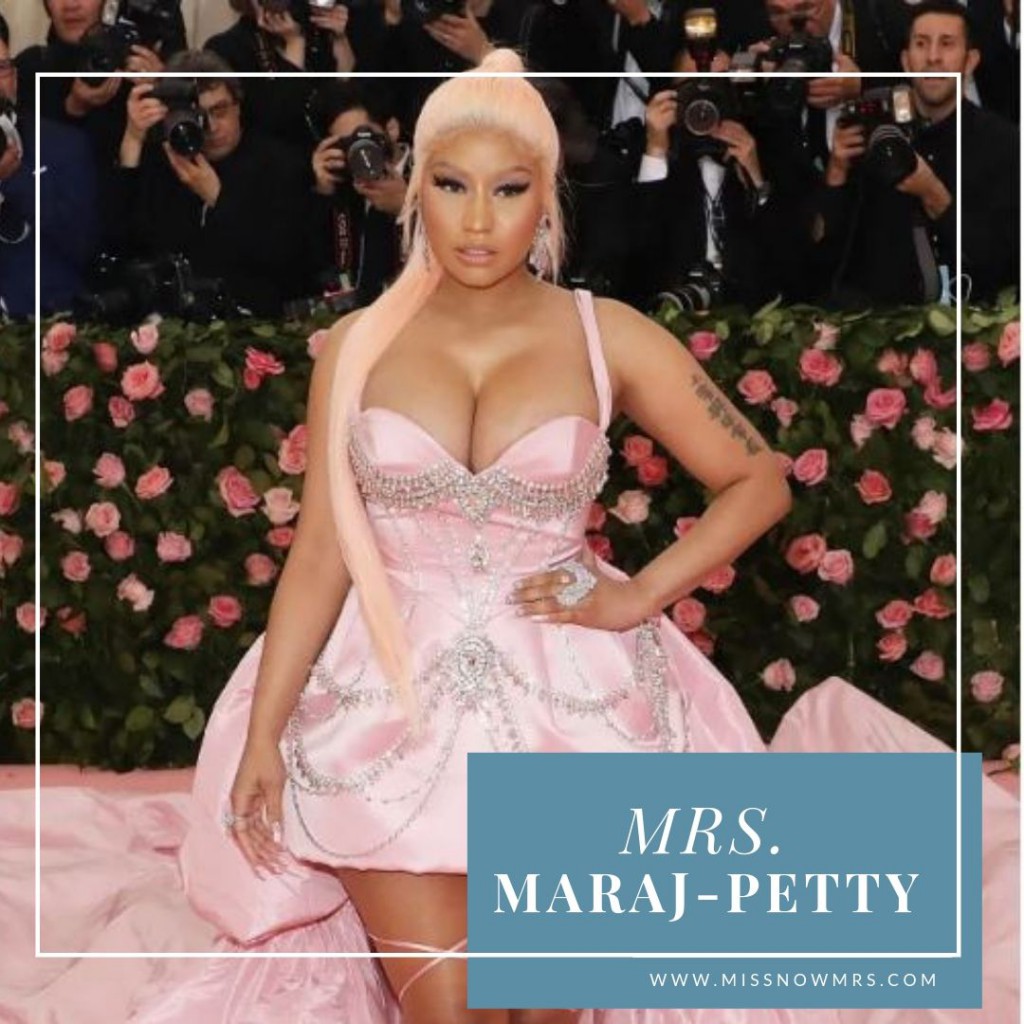 Niki Minaj’s married name change is causing all sorts of celebrity buzz! Rumor has it that the rapper, singer, song writer is planning to hyphenate her maiden name with Kenneth Petty’s. That would make her Mrs. Onika Tanya Maraj-Petty.

Name change after marriage is a very personal decision.  But, there are a few key life factors that tend to influence a woman’s choice. In Nicki’s case, her age and fame are factors that would pull heavily towards her keeping her maiden name. Studies show that the older a woman is at the time of marriage, the more likely she is to keep her name. Also, the more a woman’s career is tied to name recognition, again, the more likely she is to hold onto her maiden name after marriage.

Name change research and studies can never capture the “love” factor that plays into decision making. But love is definitely part of the equation. As name change experts, we hear the reasons for newlywed name changes all day! Many couples feel that name change shows that they’re “all in” or it ties them together in a very noticeable way. It would be so fun to interview Nicki Minaj about her name change choice and the factors that helped her reach the decision to hyphenate. Every newlywed is different… so the story is always fascinating!

If you’re considering changing your name, but aren’t sure what name combination is legal in your state, play the Married Name Game. This cute quiz has a patent-pending algorithm that matches you with your best married name change option or option(s.)

When and if you’re ready to do something along the lines of Niki Minaj’s married name change, we have the solution. The MissNowMrs App condenses the tedious 13 hour process into 3 minutes! Simply snap photos of the bar codes on your license and your spouses. Next, tap the answers to a few questions. Finally, we will send you all of the necessary name change forms completed with your information along with pre-addressed and pre-posted envelopes and instructions on exactly how to file.

In the 2019 trend of celebrity name change, Miley Cyrus is also opting to change her name after marriage. While keeping her maiden name professionally, personally Miss Miley is now Mrs. Miley Ray Hemsworth. Miley Cyrus is queen of unpredictability, but as name-change experts we had been predicting her name change based on her age, background, and the trends we’ve been seeing in married name change since 2018.
Miley’s husband, Liam Hemsworth, was totally surprised by her choice to make the switch to Mrs. In a recent interview on Live with Kelly and Ryan he shared, “I think that was honestly one of the best things about it. I didn’t ask her to take my name, but then she’s like, ‘No, of course I’m taking your name. I’m like, ‘That’s awesome. That’s really good.'”

Married name change is a personal choice influenced by many factors in a newlywed’s life. We encourage anyone considering changing their name to think about it from all angles and make the decision that best suits their life and relationship. If you do decide to change your name after marriage, the MissNowMrs name change app was designed to save you 13 hours of form hassle by allowing you to change your name on your phone. Users simply Snap… Tap… and become a Mrs. ASAP!

Married name change is always a hot topic. One camp firmly believes it’s a feminist abomination, and the other camp sees the romance and tradition of sharing a name with your spouse. As name-change experts, most people think that we’re pro name change. In fact, we’re not. We’re pro whatever name change decision is best for a newlywed.

Priyanka Chopra is the latest celebrity to choose to change her name after marriage, and her comments on “The Tonight Show” around why she made that decision are very similar to the ones we hear on the phone and via email at the MissNowMrs offices. For certain newlyweds changing their names makes them feel like they’re a family and closer to their spouse.

We particularly love how Priyanka was quick to follow her quote about changing her name with the fact that she’s not losing her identity, she’s just adding Nick Jonas to hers. We’re calling that a total #identitywin. Name change after marriage isn’t for everyone, but if you want to change your name don’t be ashamed about your choice.

Every love story and couple is different… don’t let other people’s opinions and assumptions influence your name change decision. Annnnnd… if you want to change your name, but are overwhelmed by the number of government agencies that you have to contact, the MissNowMrs Name Change App and Married Name Change Service were designed to help you skip the 13 hour hassle! 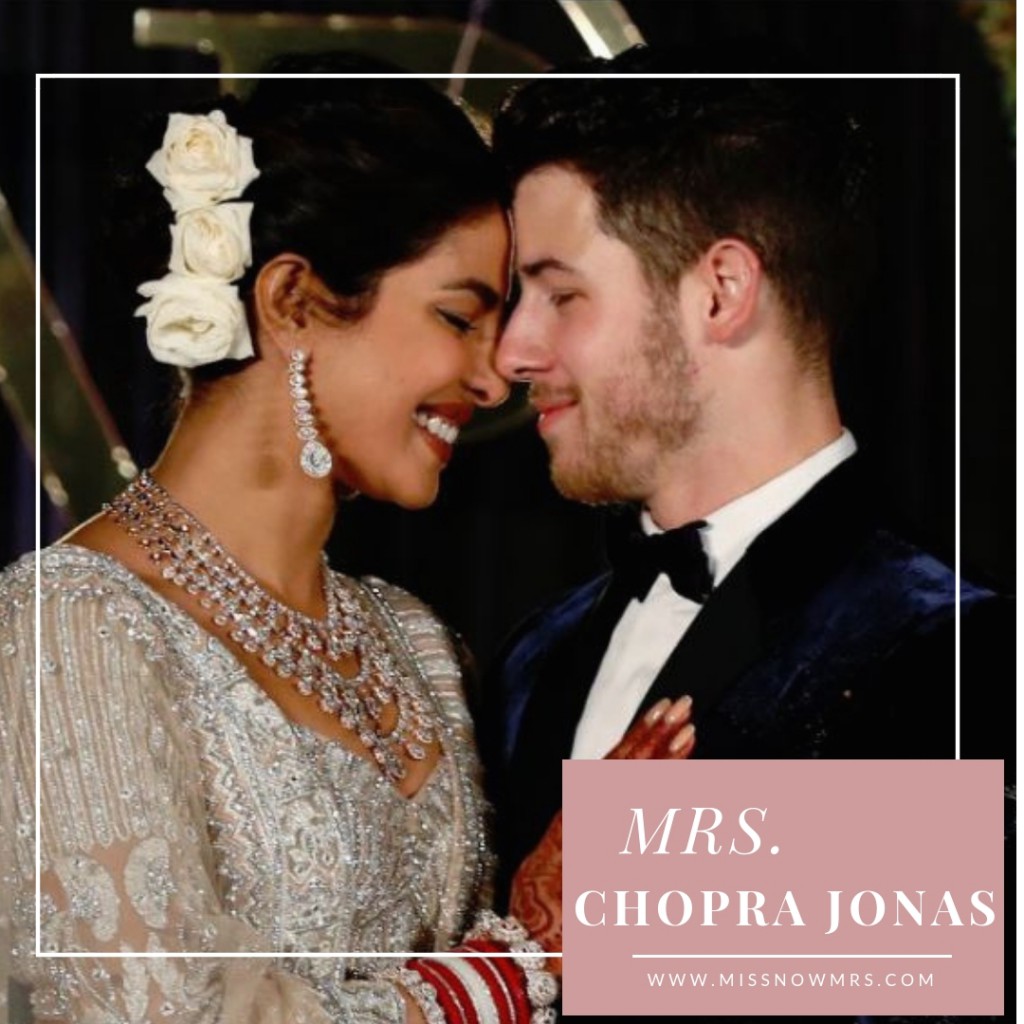 Tis the season for celebrity name change! Priyanka Chopra and Nick Jonas tied the knot on December first, and 9 days later Priyanka unveiled her new married name on Instagram. Based on the beautiful name card in the photo featured on her Instagram Page, Priyanka will be Mrs. Priyanka Chopra Jonas.There are several factors that affect a woman’s name change decision, and as name-change experts we thought it would be fun to break down the factors in Priyanka’s life that could influence her name change.

A huge factor in name change it the bride’s age at the time of marriage. The younger a woman is, the more likely she is to change her name in some way. The older a woman is at the time of marriage, the more likely she is to keep her maiden name in some way. Priyanka is 36, an age where a majority of women have established their careers, so it makes total sense that she didn’t elect to become Mrs. Priyanka Jonas… she kept her maiden name and added her husband’s last name.

Level of education also factors into the married name change equation. Although Priyanka intended to study aeronautical engineering, she left college after winning the Miss World Pageant to pursue film roles that were offered to her.

A factor that cannot be measured in relation to married name change is love. Love makes us all do things that we may never have considered. Name change can be a couples’ symbol that they’re “all in” on their marriage, it may be a tradition they want to keep, or a choice they both made together. Regardless of the factors that influenced Priyanka’s name change, we wish her and Nick a lifetime of love and happiness! And, if Priyanka’s name change paperwork hasn’t been filed we’d love for her to use the MissNowMrs app to become a legal Mrs. in minutes!